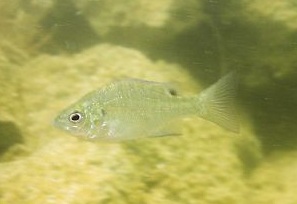 Virtual reality and simulations created for animals could help scientists in studying animal behaviour using new research methods. Even though researchers can never be sure on how animals perceive the world, the environment, and therefore also the simulation of it, a virtual environment provides a certain amount of control and the possibility to exclude (potentially) influential variables.

An example of how virtual reality helps in animal behaviour research is recently published in the Science journal. At Princeton University, researchers have developed a digital application projected into a fish tank that simulates prey for the bluegill sunfish.

In this so called “game” the red dots (representing prey) moved in different ways and it was found that they were less likely attacked by the bluegill sunfish if they moved in group formation. This experiment provided the researchers with more control over the parameters and the coding enabled random formation and movement of the dots. New plans include the development of a 3D environment.

The use of virtual reality and digital simulations for animal behaviour research brings up two main questions for me:

– How do these animals perceive their environment and is this somehow comparable with their perception of reality?

– And is there any reason for the connection of this experience for the animal with ‘play’ or (video) ‘games’ as exemplified in this BBC message or questioned in this article?

I think we should be very careful in connecting concepts such as ‘reality’ or ‘play’ to these experiments, since drawing conclusions based on superficial anthropomorphic statements, such as fish playing video games, could prevent us from actually acquiring a closer understanding of the animal.