Skip to content
Posted on May 24, 2017August 29, 2018 Tagged Breath of the Wild, game, Nintendo, speciesism, veganism, ZeldaLeave a comment

Update: please find a reflective follow-up post on my experience of playing BOTW as a vegan here. Alternatively, the research paper on this topic can be found here. 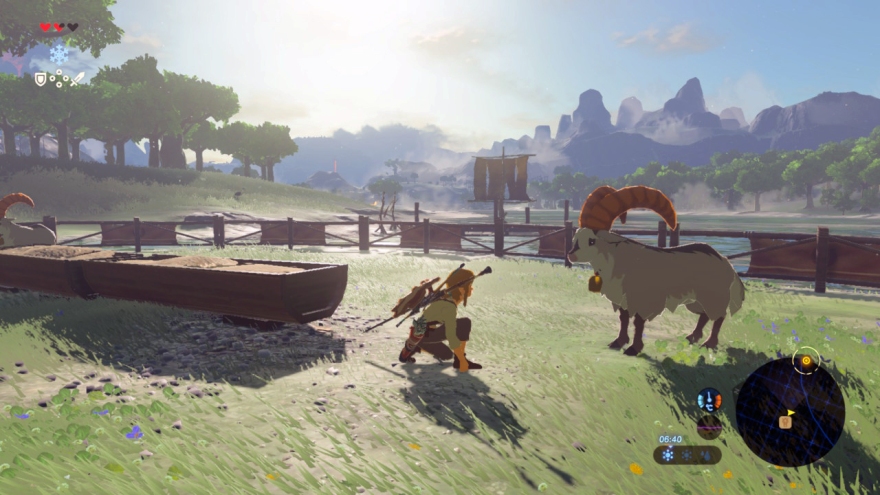 I find it seriously quite difficult to live a completely vegan life style in reality. Every meal or purchase involves another complicated decision making process. Most of the time it works out, but sometimes I make compromises or I lack the confidence to insist on my veganism when it requires some cooperation of other people. Maybe my friends want to go to a specific restaurant that doesn’t have any vegan options. Perhaps I’m traveling for work and I am in need of healthy food/proteins to keep my energy levels up, but all the vegan dishes include a collection of carbs, sugar, and a tiny leaf of lettuce. Or maybe I’m simply too weak to refuse the amazingly good looking salmon sushi (I know… it’s all my fault!!). And what?! Beer is not always vegan?

More difficult scenarios occur as well. Do I want to sit on my friend’s leather sofa? Is my occasional painkiller tested on animals? Do I still use that old leather bag? What is my hairbrush actually made of? What if I accidentally kill an ant while I’m walking through the woods? Is it wrong to be madly in love with someone else’s puppy? AAAAHH! Life is hard (not really, I realize that I’m privileged, although please mind that veganism itself is not a privilege, the ability to make food choices is).

It is actually quite hard, if not impossible, to imagine and live my life as a complete non-speciesist. BUT WAIT… WHAT IF I COULD LIVE A FULLY NON-SPECIESIST LIFE IN A VIRTUAL WORLD INSTEAD?

Zelda – Breath of the Wild

It was the first time I saw somebody play Nintendo’s new Zelda game. In the game, my friend walked around the forest, picked up a tree branch, walked towards an innocent red little Bokoblin, and started beating him to death:

me: NOO! WHAT ARE YOU DOING?! This creature didn’t do anything to you, why did you need to kill him?

friend: Well, because it gives me more resources and the game wants me to do it.

me: But that doesn’t mean you have to!

So I started playing Zelda with the same non-speciesist intentions I have in real life in the attempt to do a Vegan Run.

Before you start getting angry, please note that here I do not claim that in playing Zelda, or any other game for that matter, we should abandon all forms of violence (although I fully support critical readings of oppression towards others in different media forms (particularly with regards to sexism, racism, and speciesism).

Instead, in a much more personal and carefully set-out thought experiment, I imagined that within this virtual world, I could perhaps get much closer to speculating and philosophizing about the non-speciesist lifestyle of Link (the main character of the game). In other words, I approached the game with the question: could it be possible to live a vegan lifestyle in a more satisfying way within this virtual world, compared to real life? Perhaps it would be easier, because there are significantly less complicated options and choices to make within Zelda’s virtual environment, as opposed to real life. And perhaps this experience could propose new ideas about our views on non-speciesism, living together with animals, or it might give us some new (non-oppressive) ideas about the design of future (virtual) worlds.

With a bit of background research, I quickly discovered that (as expected) other vegan Zelda players had very similar intentions. Interestingly, although the game encourages you to turn in to a violent masculist bully machine (like my friend quickly signed up for), the game also allows you to successfully live off apples, mushrooms, and other veggies, run away from anything that tries to attack you, and ignore any side-quests that try to convince you to abandon this goal and become part of the dominant masculist culture (sounds much like real life, right?).

Since I am still playing the game, I cannot share any final reflections or insights. Nevertheless I wanted to share some of the situations and challenges I got myself into so far:

In the first minutes of the game, Link wakes up in his underwear, but the player quickly finds some old clothes to put on. They seem to contain some leather straps, but I figured that since they are very old, I might as well hold on to them. Throughout the game players can upgrade their clothes. Some of these contain leather or wool, but there are certainly some other vegan options as well.

Perhaps just like in real life, assembling a vegan diet is possible, but sometimes challenging. Here I am just running around in Hyrule, collecting apples, mushrooms, and other veggies. Happily ignoring the numerous attempts in which the game tries to convince me to hunt innocent forest creatures, kill for fun, and cook with animal ingredients.

No, I Won’t Help You Out, Farmer

To progress in the game, it is sometimes necessary to kill mechanical monsters (made of machine parts), defend myself from creatures that attack me, and work towards restoring peace in the Hyrule kingdom. However, some of the side quests include speciesist practices that I’d rather ignore:

Don’t Try to Lure Me into Becoming a Bully

Playing the game with these non-speciesist intentions, makes me much more aware of the numerous attempts that the game takes in convincing me to become a violent bully. These are some of the speciesist loading screen tips I got so far:

And no “Bro”, I am certainly NOT thinking about riding a horse, no matter how many times you try to convince me to: 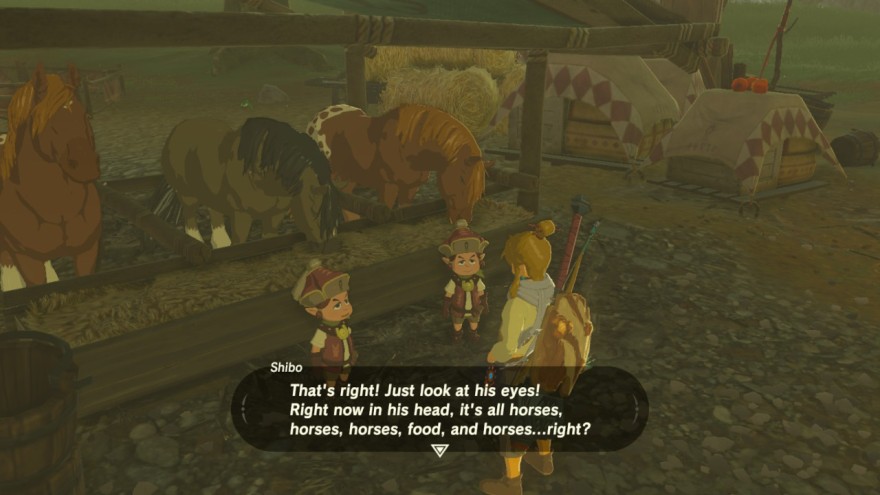 However I must admit, living a non-speciesist life in the worlds of Zelda is much harder than I expected it to be (but still easier than in the real world). As an example, some questions I’m currently struggling with include:

Let me know what you think or if you have any other questions I should include!

Update: please find a reflective follow-up post on my experience of playing BOTW as a vegan here. Alternatively, the research paper on this topic can be found here.